St. Hildegard von (of) Bingen died on this day in 1179, at the age of 81.  She was a Benedictine Abbess at Bingen, a city on the Rhine in Germany -- but she is best remembered as a writer, a mystic, a philosopher and especially as a musician, composer and lyricist.  She authored books on the subjects of theology, botany, medicinal use of plants, as well as poetry and songs, originally sung by the nuns at the Abbey.  In recent years, her music has been sung, recorded and enjoyed as a gentle background to prayer and contemplation.  Though beatified by the Roman Catholic Church centuries ago, it was in just May of 2012 that she was officially canonized, and in October of that year, named as a "Doctor of the Church" for her holy life, and for her teaching.

For those of you who enjoy Medieval music, as well as for those who have yet to hear it, the video below is a taste of St. Hildegard's work, performed by Ensemble Vocatrix in December of 2017 at the Zipper Concert Hall at the Colburn School. The performance is just over 20 minutes long; may it bless your quiet time today.

O God, by whose grace your servant Hildegard, kindled with the Fire of your love, became a burning and shining light in your Church: Grant that we also may be aflame with the spirit of love and discipline, and walk before you as children of light; through Jesus Christ our Lord, who lives and reigns with you, in the unity of the Holy Spirit, one God, now and for ever.

Posted by Margaret at 9:02 AM No comments:

Just because you might be a "cradle Christian" (of the Anglican persuasion or otherwise) doesn't mean you won't learn something new.*

Just think about it...

*Editor's Note: Full disclosure: my late DH and I took this at St. James Calgary in Calgary in the early nineties.  It was one of the ways God found to show Jesus to Howard.  He and I were in different break-out groups.  He pummelled his with questions.  God went to work in those who responded to try to answer those questions.  Meanwhile, it supported me, the 'cradle Anglican'.  And yes, Rev. Andy Lees -- who presides part time at Christ Church Fort Macleod -- was part of the team at the time.

Posted by Margaret at 4:21 PM No comments:

The calendar in my copy of the Book of Alternative Services for our Canadian church marks a "Mem" (Memorial Day) for St. Cyprian, Bishop of Carthage, on September 13...but today his ministry and martyrdom were remembered in reflection and prayer at the Morning Prayer Service from the Canterbury Cathedral.   Wikipedia has his date of death -- as a martyr -- as September 14, coincident with Holy Cross Day.  Whatever the date, it is important to take a few moments to remember St. Cyprian, for whom our parish is named.

May this bless your day.

The Feast of the Cross -- Holy Cross Day 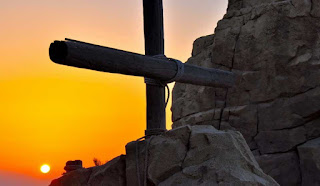 September 14 marks the Feast of the Cross,

There are three reasons for this celebration on this day:

Today we recall Jesus' sacrifice for all the world, in his death on the cross, and in that, acknowledge the unity of all who follow him, and whose ministry is to spread the Good News of the salvific love and grace of God found in Christ and his teachings.
The Collect for Holy Cross Day
Almighty God,
whose Son our Saviour Jesus Christ
was lifted high upon the cross
that he might draw the whole world to himself,
may we who rejoice in the mystery of our redemption,
have grace to take up our cross and follow him,
who lives and reigns with you and the Holy Spirit,
one God, now and forever.
AMEN.
Jesus is Given His Cross - a Poem from Malcolm Guite

He gives himself again with all his gifts

And now we give him something in return.

He gave the earth that bears, the air that lifts,

Water to cleanse and cool, fire to burn,

And from these elements he forged the iron,

From strands of life he wove the growing wood,

He made the stones that pave the roads of Zion

He saw it all and saw that it is good.

We took his iron to edge an axe’s blade,

We took the axe and laid it to the tree,

We made a cross of all that he has made,

And laid it on the one who made us free.

Now he receives again and lifts on high

The gifts he gave and we have turned awry.

To hear the poet read this and three addtional sonnets on The Cross, click HERE.

May this bless your day

and the week ahead.

Posted by Margaret at 9:16 AM No comments: 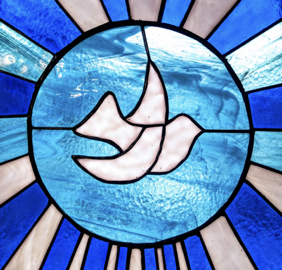 The service today is planned for outdoors at the Parish of St. John's, Olds, so there will be no recording.

Here are some links to services you might find to bless your day:
Posted by Margaret at 10:53 AM No comments:

For 9/11: A Tribute at Morning Prayer

A Dear Friend Has Left Us... 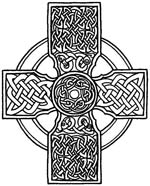 Men's Breakfast will never be quite the same. This dear man, Glen Grover, sat in the pew behind me, with this wife Joan -- when she wasn't at the organ. He was always there to lend a hand, unfailingly cheerful, with an open face, smiling eyes. He will be missed by all whose lives were touched by him -- even a wee bit. RIP, Glen.

I need to inform you that a much-loved and long-time member of St. Cyprian's, Glen Grover, died suddenly yesterday afternoon [September 8].
Please keep Joan in your prayers.
God of grace and glory, we thank your for Glen, who was so near and dear to us. We thank you for the friendship he gave and for the strength of witness he showed. We pray that nothing good in his life will be lost, but will be upheld by those who knew him to the benefit of others.
Grant, O Lord, to all who are bereaved the spirit of faith and courage, that they may have strength to meet the days to come with steadfastness and patience; not sorrowing as those without hope, but in thankful remembrance of your great goodness, and in the joyful expectation of resurrected life with those they love. This we ask in the name of Jesus Christ our Saviour. Amen.
The Rev. Robert Sears, Incumbent

Posted by Margaret at 4:39 PM No comments:

Alternate Sundays:
10 a.m. - Holy Eucharist (BAS)
10 a.m. Eucharist (Reserved Sacrament) OR Morning Prayer (BAS)
Children welcome!
NOTE: As of March 15, 2020, services and functions at the church have been suspended indefinitely, as required by protocol to mitigate the spread of the COVID-19 virus.

Calendar At A Glance

Sunday, June 14, 2020
Services and other church gatherings have been suspended indefinitely to mitigate spread of the COVID-19 coronavirus.
Online services from Anglican parishes will have links updated on this site as the information becomes available. Thank you for your patience; may you continue safe and well.

About Our Blog Admin